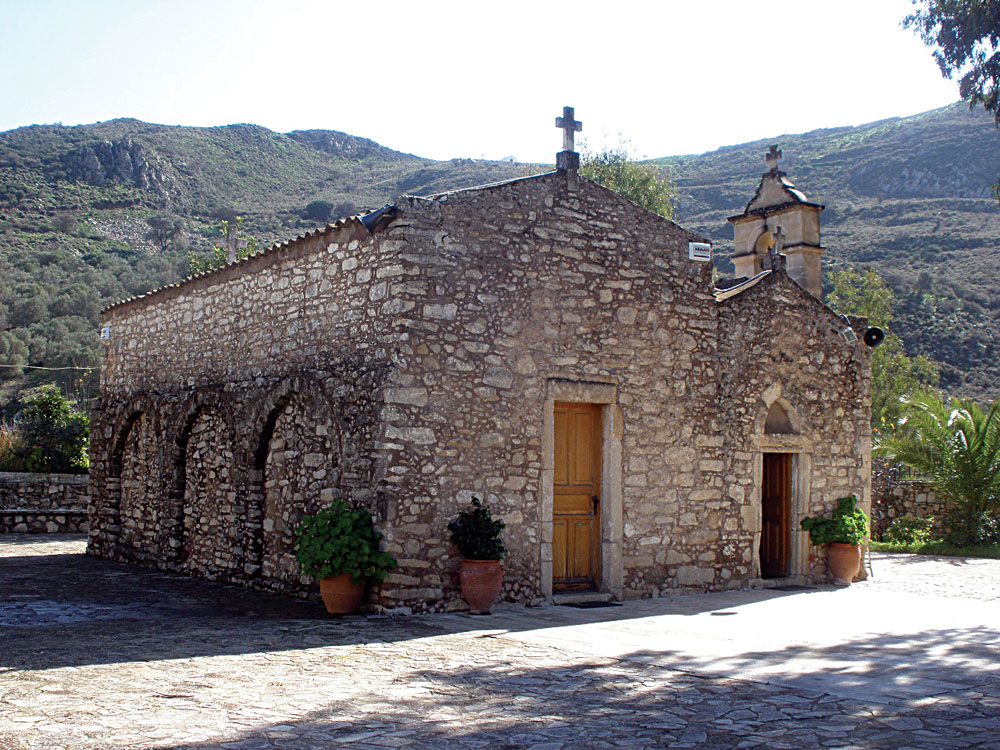 The church of the All-Holy Virgin Almyri [‘Salty’] is located on the eastern side of the homonymous gorge and at a distance of about one kilometre from the ­settlement of Vourvoulites. It is a twin-naved church in the centre of a courtyard ­surrounded by recently built guest houses which are used by the many pilgrims […] 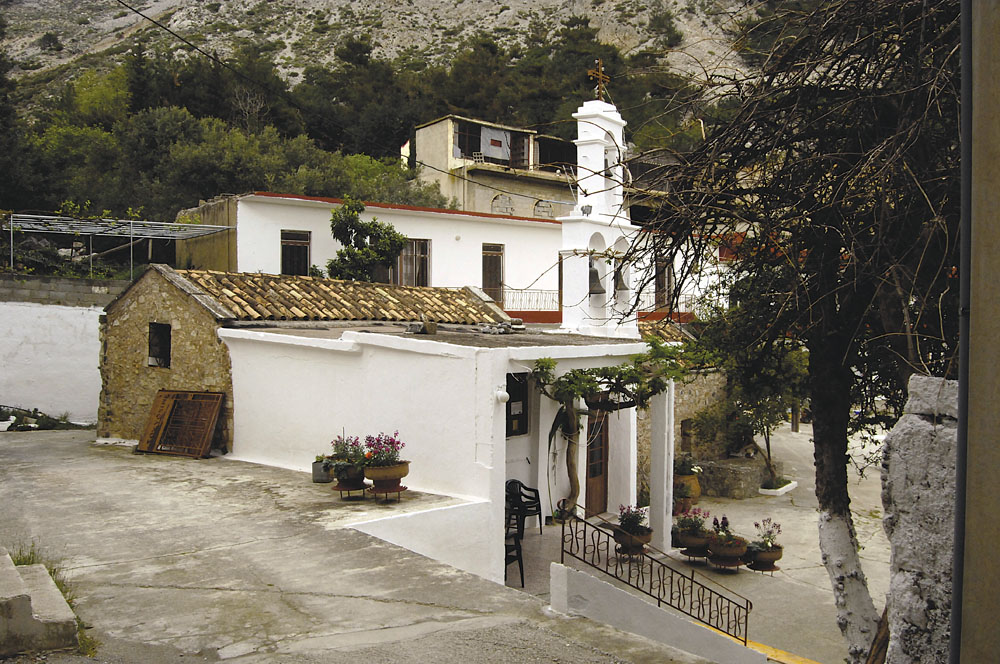 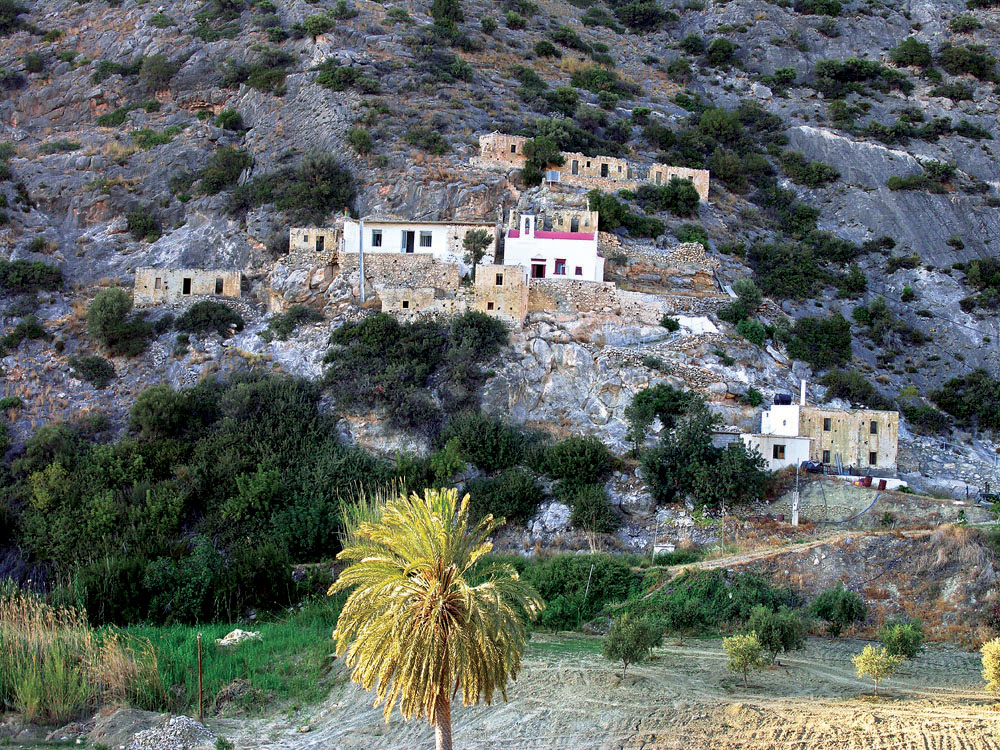 Agios Antonios Monastery was founded around 1880 by the monk Artemios. According to tradition, Artemios initially selected the exit of Arvi canyon, where the temple of Arvios Zeus was located, as the location for the Monastery, but later moved higher up, on the eastern foothills, where he built the first cells of the Monastery. The […] 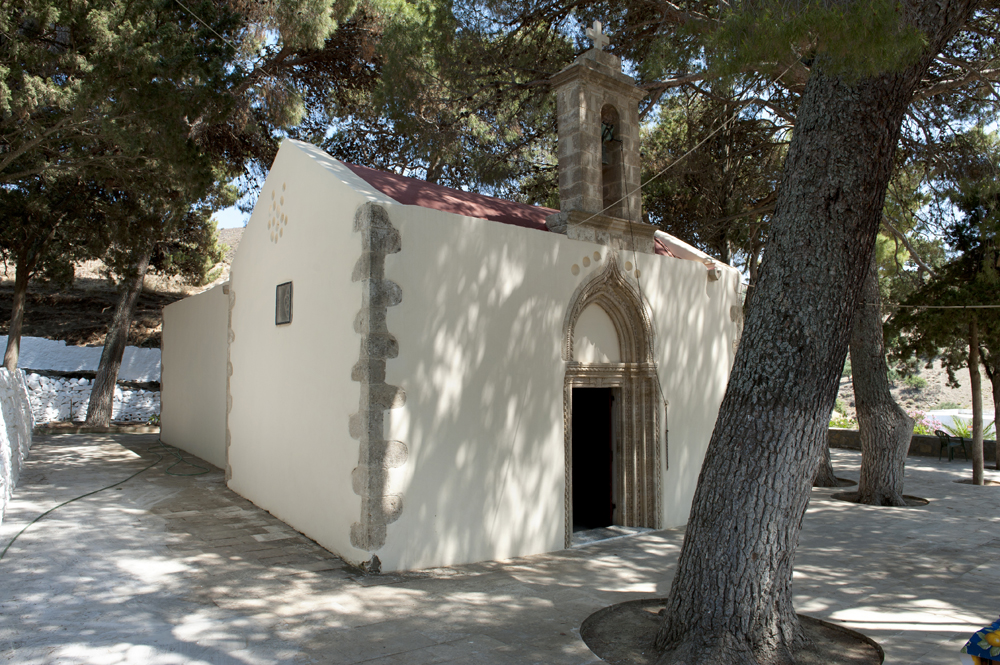 Agia Moni, a convent dedicated to the Dormition of Mother Mary, is located at the exit of Afrati canyon. According to tradition, it was built by three Cypriot nuns, who initially built the church of Agios Dimitrios (St. Demetrius) in Keratokambos. The monastery operated until 1842 but was deserted from 1842 to 1865. On August […] 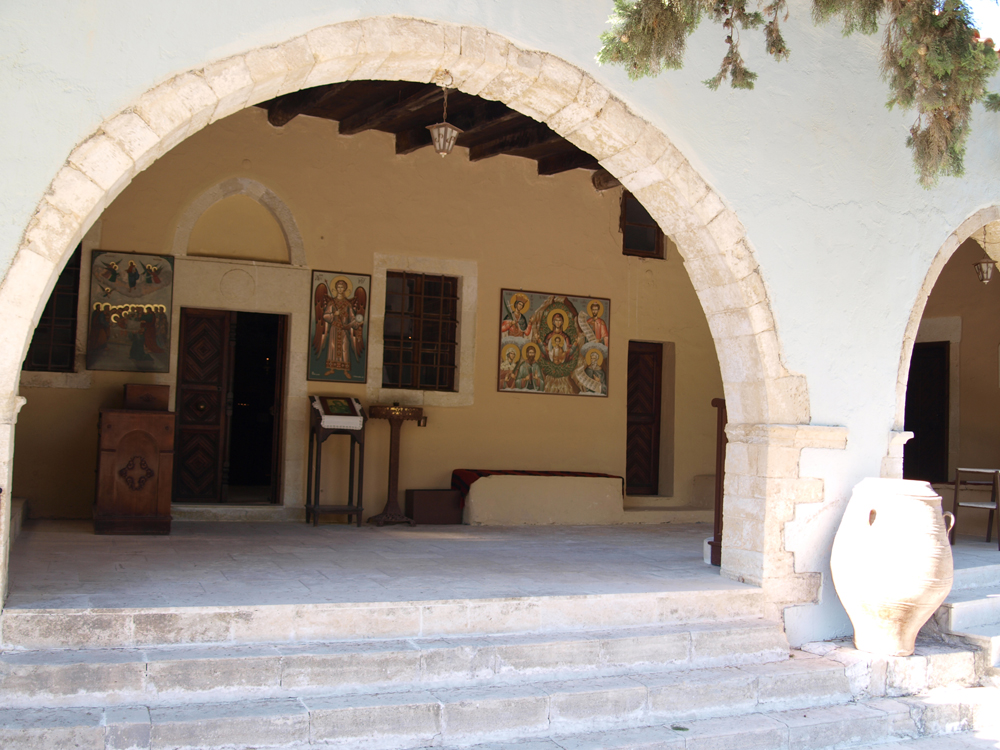 The Monastery of the Virgin Mary of the Cave is located on the hillside of a small canyon north of Houdetsi and is a glebe of Sina Monastery. The Monastery was founded in the 14th century and is built on three levels. The top level includes the Church of the True Cross and another church […] 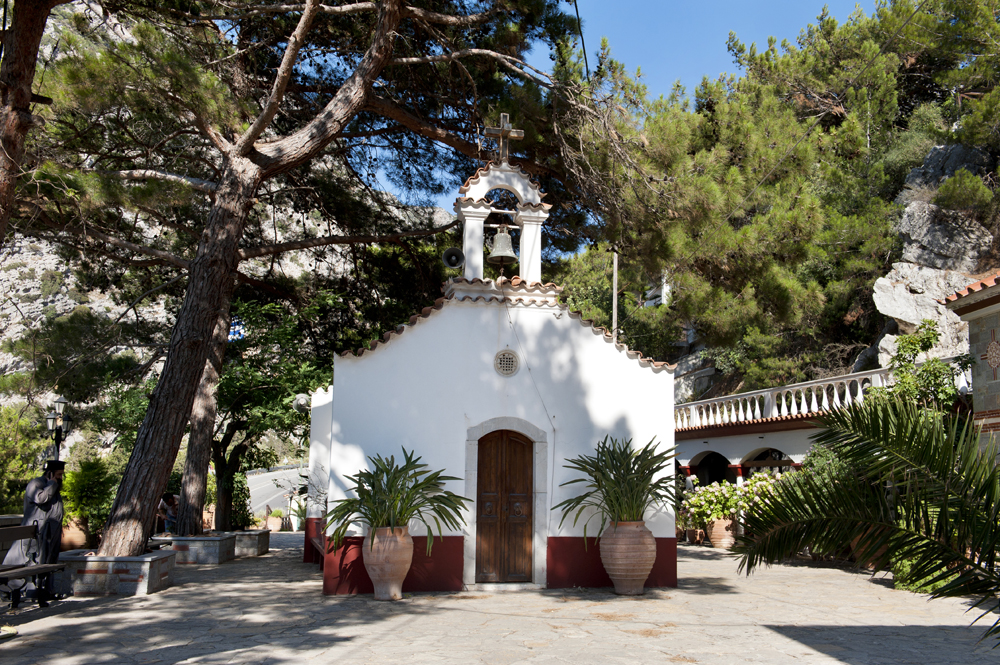 Agios Georgios Monastery, located in Selinari gorge, was built during the 2nd Byzantine era. The catholicon is dedicated to Saint George. There are two other churches, one dedicated to the Epiphany and the other to the Resurrection. The icon of Saint George, the protector of travellers, is considered to be miraculous and is a traditional […] 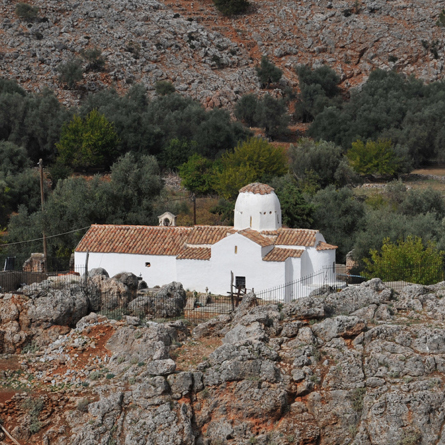 At the edge of the Aradena Gorge, in Sfakia, lies a deserted hamlet of the same name, where the church of Archangel Michael or Astratigos – as Sfakia residents call him – stands. It is a cruciform church with a six-sided cupola with several features of the School of mainland Greece (Helladic), built on the […] 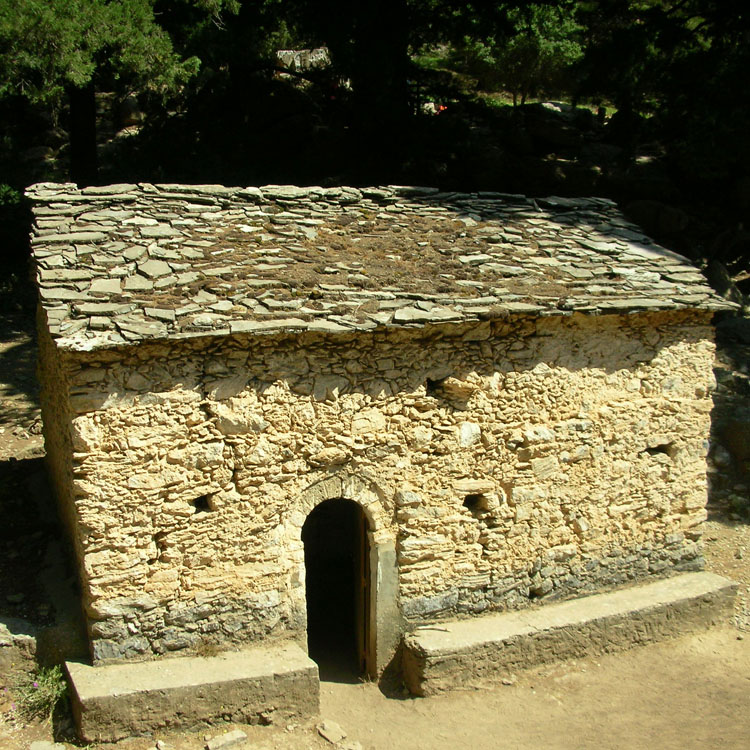 Half way down into the Samaria Gorge lies the deserted village of the same name. Here stands the Byzantine Church of Osia Maria from Egypt, which gave the gorge its name (osiamaria=samaria). This is a one-aisled, arch-roofed church with 14th century murals. 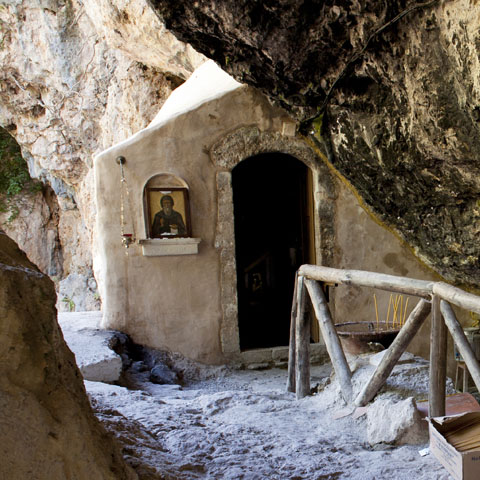 The church is built within a rock, in the lush green of the gorge of St. Anthony. It is accessible through a well-kept path and can be reached after a brief walk. This exceptional church contains numerous portable icons and a wealth of votive offerings of various types. 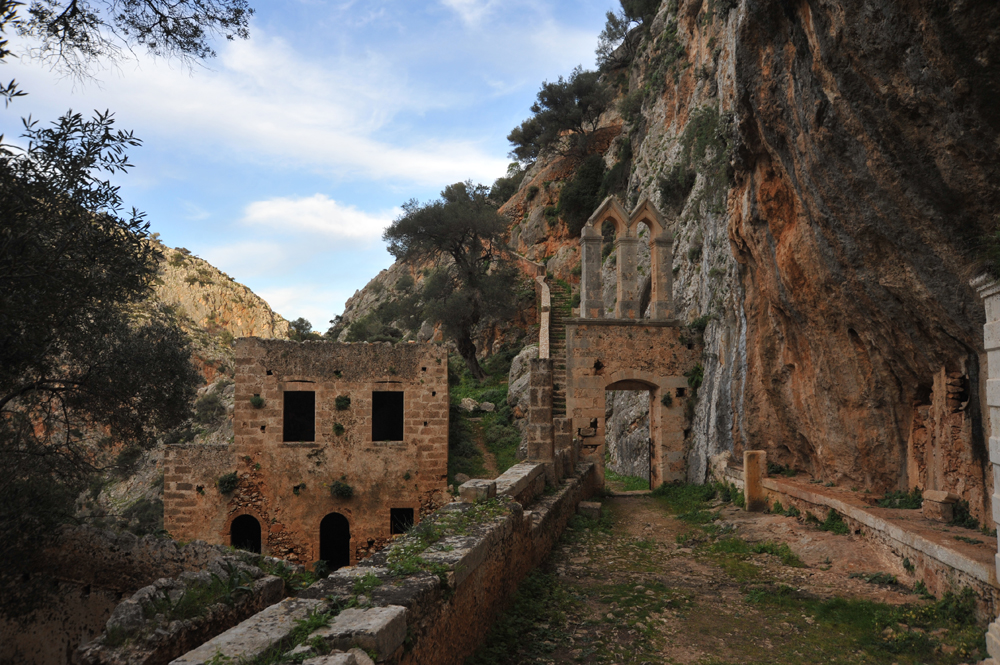 The visit to Guverneto offers travellers the opportunity to view two interesting Christian monuments in the area. North of the monastery a stony downhill path leads to the Cave of Arkoudiotissa (Bear Lady). The name comes from a stalagmite in the form of a bear and within the cave traces of Goddess Artemis [Diana] worship […]